Global Climate Change
The Crime of All Time 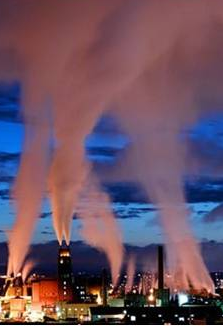 Proof: IPCC
‘...the intentional infliction of conditions of life, inter alia the deprivation of access to food and medicine, calculated to bring about the destruction of part of a population;  Rome Statute
Executive summary

We are certain of the following:
- there is a natural greenhouse effect which already keeps the Earth warmer than it would otherwise be;
- emissions resulting from human activities are substantially increasing atmospheric concentration of greenhouse gases carbon dioxide, methane, CFCs and nitrous oxide;
- these increases will enhance the greenhouse effect resulting on average in an additional warming of the Earth's surface;

- the main greenhouse gas water vapor will increase in response to global warming and further enhance it.

We calculate with confidence that :

-some gases are potentially more effective than others at changing climate and their relative effectiveness can be estimated;
-carbon dioxide has been responsible for over half the enhanced greenhouse effect caused and is likely to remain so in the future;
-continued emissions of these gases at present rates would commit us to increased concentrations for centuries ahead;

-the longer  the emissions continue to increase the present rates the greater reductions would have to be for concentrations to stabilize at a given level.

Under the IPCC business as usual (scenario A) emissions, global mean temperature during the next century of about 0.1 to o.3° C. a decade. This is greater than that seen over the past 10,000 years. 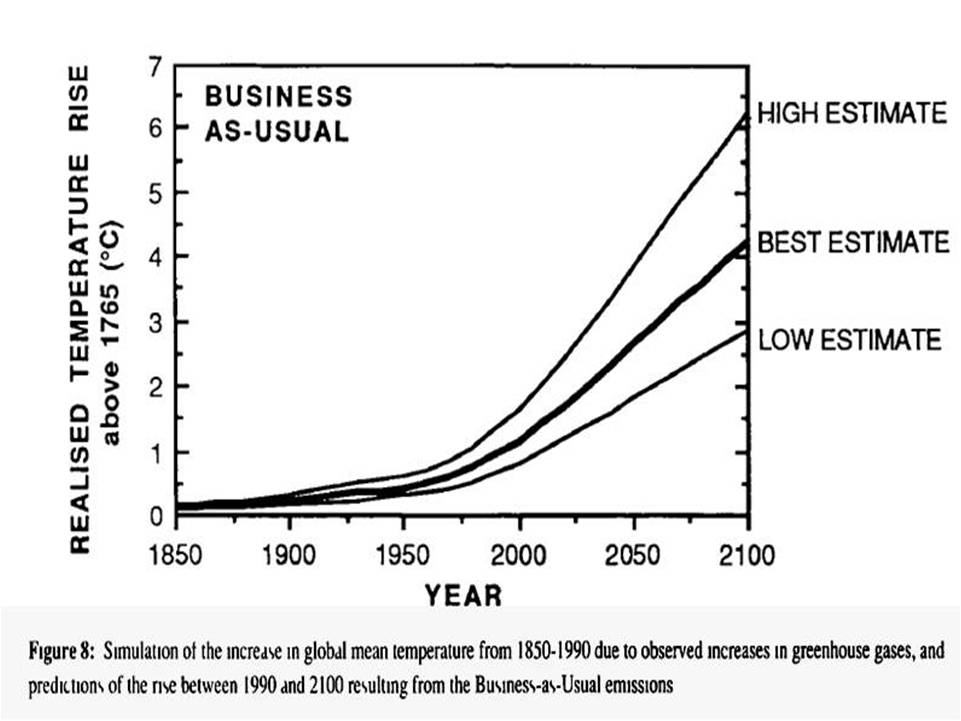 The 1st IPCC assessment of 1990
Climate feedbacks
The 1990 assessments found that the overall effect of climate feedbacks would be positive meaning that global warming would cause the warming planet to add even more warming. The additional temperature increase from these feedbacks wasnot included in the 1990 projections and was still not included in the 2007 assessment.
Furthermore, because natural sources and sinks of greenhouse gases are sensitive to a change in climate, they may substantially modify future concentrations (see earlier section "Greenhouse gas feedbacks") It appears that, as climate warms, these feedbacks will lead to an overall increase, rather than decrease, in natural greenhouse gas abundances For this reason, climate change is likely to be greater than the estimates we have given.
The changes predicted to occur by about the middle of the next century due to increases  in greenhouse gas concentrations from the Business-as-Usual emissions will make global mean temperatures higher than they have been in the last 150,000 years
11.2.1 In particular, global warming is likely to decrease the absorption of carbon dioxide by sea  water and lead to widespread melting of methane gas  hydrates in and under the permaltost and also release CH4.
Greenhouse gas feedbacks

Some of the possible feedbacks which could significantly modify future greenhouse gas concentrations in a warmer world are discussed in the following paragraphs.
The net emissions ol carbon dioxide from terrestrial  ecosystems will be elevated if higher temperatures increase  respiration at a faster rate than photosynthesis or if plant populations particularly large forests, cannot adjust rapidly enough to changes in climate.
A net flux of carbon dioxide to the atmosphere may be particularly evident in warmer conditions in tundra and boreal legions where there are large stores of carbon.
If the oceans become wanner, their net uptake of carbon dioxide may decrease because of changes in (i) then chemistry of carbon dioxide in seawater, (n) biological activity in surface waters, and (in) the rate of exchange of carbon dioxide between the surface layers and the deep ocean This last depends upon the rate of formation of deep water in the ocean which, in the North Atlantic for example, might decrease if the salinity decreases as a result of a change in climate.
Methane emissions from natural wetlands and rice paddies are particularly sensitive to temperature and soil moisture.
Emissions are significantly larger at higher temperatuies and with increased soil moisture,
Higher temperatures could increase the emissions of methane at high northern latitudes from decomposable organic matter trapped in permafrost and methane hydrates .
As illustrated earlier, ice core iccords show that methane and carbon dioxide concentrations changed in a similar sense to temperature between ice ages and interglacials
Although many of these feedback processes are poorly understood, it seems likely that, overall, they will act to increase, rather than decrease,greenhouse gas concentrations in a warmer world.
WG 2.   2.3.3.Gas hydrates and methane

Evidence exists that degradation of permafrost as a result of the projected GHG-induced changes in climate will result in an increase in atmosphere.
Degradation of permafrost will subject previously frozen biological material to rapid oxidation and large scale release of methane, and to a lesser extent C0 2 (Billings et al., 1982) into the atmosphere.
In addition, significant quantities of methane within gas hydrates (Kvenvolden, 1988) that are trapped within and beneath permafrost will provide large amounts of this greenhouse gas to the atmosphere as degradation proceeds. The contribution of methane derived from gas hydrates may lead to an additional 0.4°C increase in global temperature by the 2020s and 0.6-0.7°C by middle of the 21st century, when atmospheric methane concentrations are expected to be twice those in the pre-industrial period. There is reason to expect that the positive feedback between climate and methane hydrates in permafrost may be even stronger than this. Owing to photochemical reactions between minor atmospheric constituents, an increase in the concentration of atmospheric methane will cause an increase in its lifetime in the atmosphere, and the greenhouse effect produced by this gas could therefore be higher.

The IPCC is unique as an environmental assessment body. Both scientists and government bureaucrats  sit on the Panel and all are involved in the writing of the assessments. The panel was in 1990 this way so that there would be a fast track of scientific information to all world governments who would be thoroughly informed of all items in the assessment.
In fact the assessments cannot be published without all reports being reviewed and accepted line by line by the Panel bureaucrats of all governments.  Every line in the IPCC assessments  and the assessment in its entirety is thereby formally approved by the governments of the world.
So it is, that the most powerful industrial nations in the world have full knowledge of the impacts and risks from global warming and climate change.
The most recent IPCC assessment is the 2018 1.5C Special Report. ​
The evidence that 2c is catastrophically more damaging in every way than 1.5C is overwhelming. Te big shocking reality  is that we may reach 15C as early as 2030. ​The Report is clear that for a 1.5C limit (by 2100) with no/little overshooting CO2 emissions must decline rapidly on an immediate basis (2020). This is nothing new. It was the same (for 2C) in ​the IPCC 2007 AR4 and 2014 AR5, and shown by all INDC mitigation projections by all sources (2C and 1.5C). The 1.5C Report is the fist one that gives numbers on what has to be done to limit warming to 1.5C or even 2C (but only by 2100)

​
The IPCC documentation approved by all the big​ industrial nation governments  proves their culpability  in the greatest crime.  To demonstrate this we only have to do is to look at the very first assessment the IPCC in 1990.
The global temperature increase at any particular time is only half of the committed eventual increase at that time.
Models predict that for the present-day case of an increase in radiative forcing which is approximately steady the realized temperature rise at any time is about 50% of the committed temperature rise if the climate sensitivity in response to a doubling of carbon dioxide is 4.5° C and about 80% if the climate sensitivity is 1.5°. If the forcing was then held constant temperatures would continue to rise slowly but is not certain whether it would take decades or centuries most of the remaining rise to equilibrium to occur 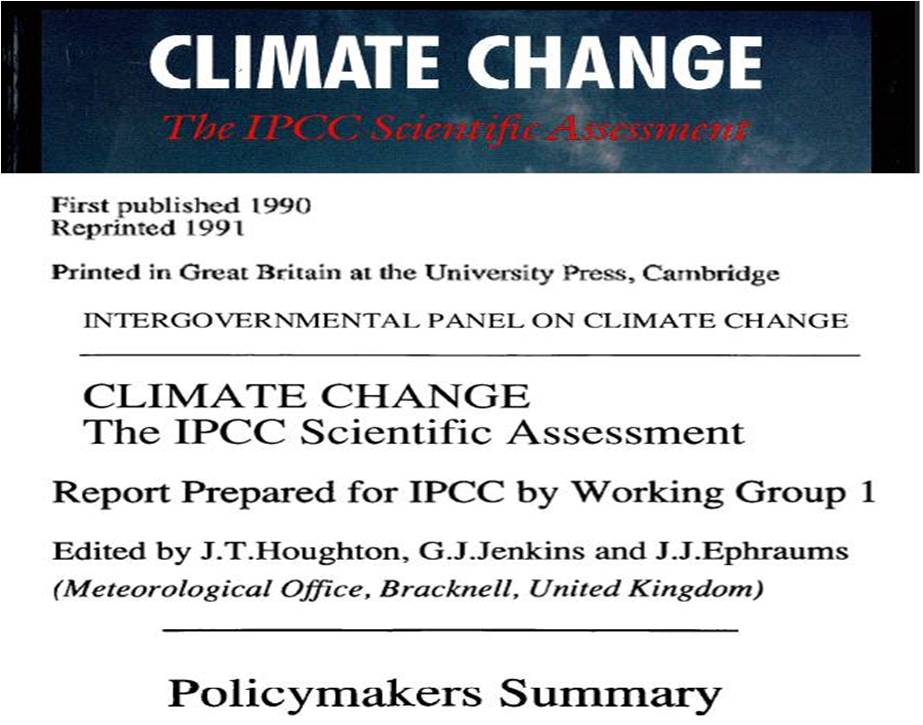 The long-lived gases would require immediate reductions in emissions from human activities of over 60% to stabilize the concentrations at today's levels, methane would require 15 to 20% reduction. 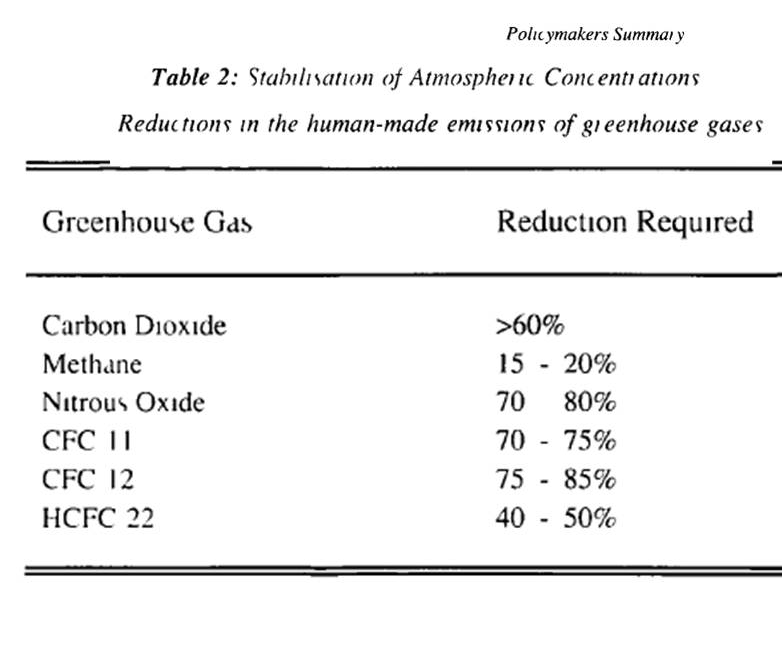 UNPRECEDENTED
​CRIME
Climate Science Denial
​ Dr. Peter Carter ​and Elizabeth Woodworth Foreward by James E. Hansen April 2018 Clarity Press
However the 1.5C Report gives policy makers false excuses for continuing to delay rapid global emissions decline. The false facts are given that  fossil fuel carbon capture sequestration (CCS) and Bio energy carbon capture sequestration (BECCS) are effective feasible mitigation methods. The evidence is to the contrary. In environmental health assessments policy decisions are based o the cost/benefit assessment.  The 1.5C Report ​​ was poisoned by the perverse false flawed fossil fuel biased economics saying " Modelled pathways limiting global warming to 1.5°C with no or limited overshoot project abatement costs over the 21st century...roughly 3-4 times higher than in pathways limiting global warming to below 2°C (IPCC 2018 SPM C.2.7) and "Estimates of the costs of adaptation might be lower at global warming of 1.5°C than for 2°C." (Standard abatement cost is the cost of reducing environmental negatives such as pollution.)
Reasons for Concern burning ember diagram
​Since 2001 of the IP CC has used the reasons for concern (RFCs)
​color spectrum diagram illustrating selected categories of risks
​and impacts . The 2018 IPCC 1.5C Report is the third time that
​the risk and impact levels have been lowered due to research
​findings that impacts occur at a lower degrees of climate change .​
​
​The  Distribution of Impacts.  RFC concerns disparities of impacts.
"Some regions, countries, and populations face greater harm from climate
​change, whereas other regions, countries may benefit."(IPCC 2018 1.5C)
No countries benefit above 1.5C , with the sole exception temperate rise production,
and the risks ​ of tipping points and runaway are ​extremely high.
This assessment approach does not account for oceans ecosystem collapse from the combination of
​​ocean heating, ​a​cidifcation and de-oxgenation. 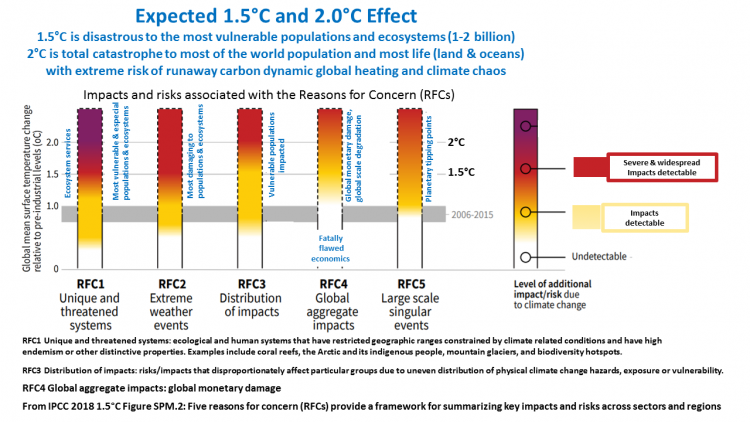 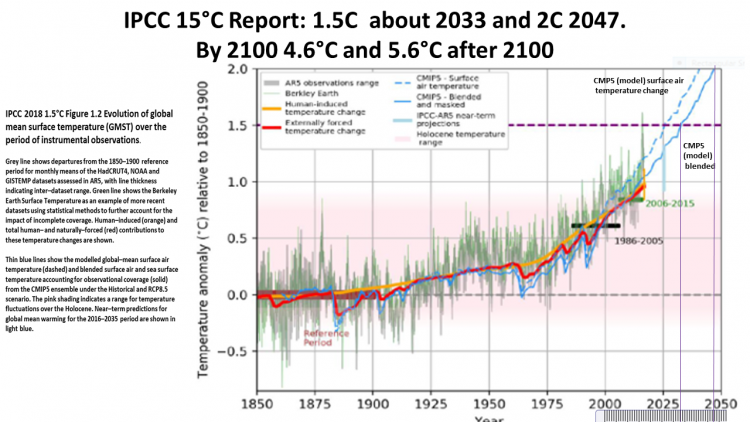 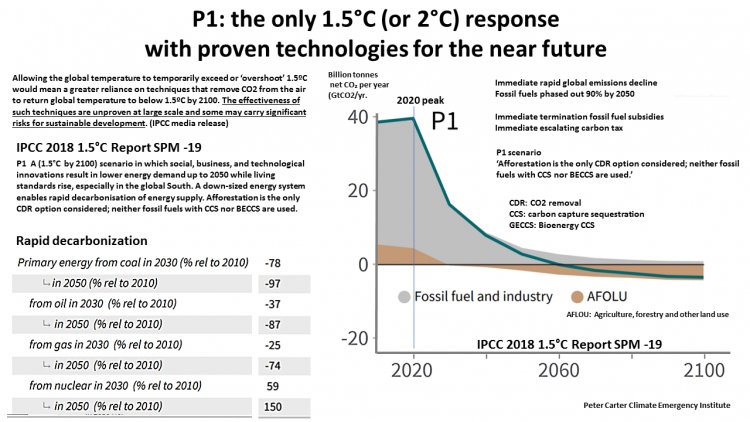